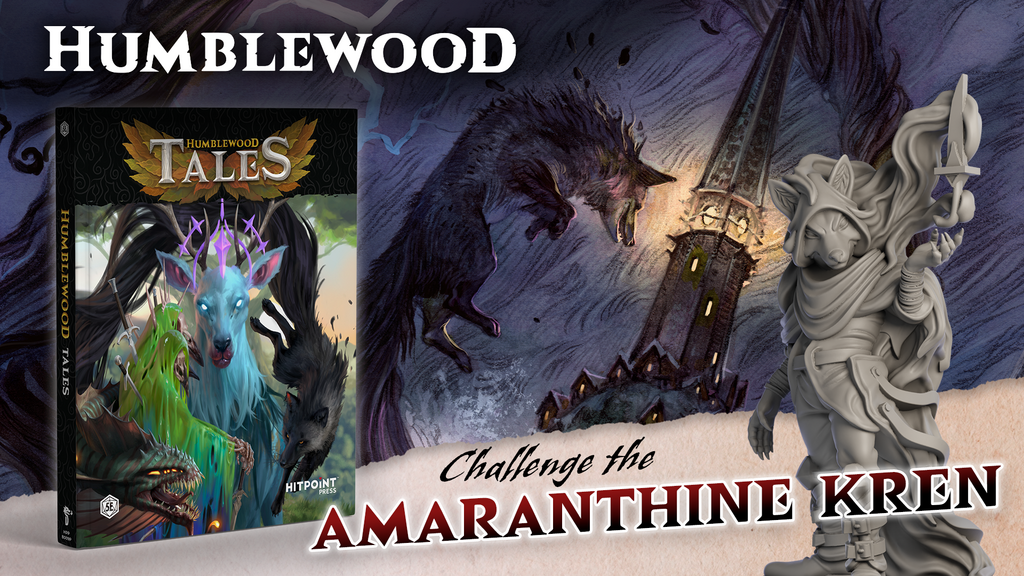 A collection of new Humblewood adventures, lore, monsters and more for 5e! What tales will you tell? Please Note: Shipping to be charged closer to fulfillment. Need help? E-mail us at kickstarter@hitpointpress.com!

Latest Updates from Our Project:

Hey backers! The team has been hard at work building the files for production since the last update. Read on for more details!

Book - There will be a full editing review after the final book is designed for production. We are wrapping up work on the pre-reviewed version, which should be ready by next week for an editor to go over it.

Physical rewards - Files are being built for production! Once they’re built, they will be submitted to our manufacturing partners along with some back and forth to ensure everything looks how we’d like it. We’ll then be sent samples or digital files to review and finalize before mass production begins. We’ll keep you updated on this process and show off any sample images we get!

Minis - The models are already produced and we are finalizing the packaging.

We've had some folks request a list of what has already gone out so they can track what's left to expect! At this time, the following have been distributed through BackerKit:

We’re happy to share that the smoke tests have been sent out! Only 5% of backers will receive a smoke test, so if you don’t receive one during this process, your survey will go out with the rest of the backers once we’ve confirmed everything is working as expected!

Please note: This coming Monday September 5th is a holiday in Canada. So if everything went perfectly with the smoke test we’ll send the rest of the surveys on Tuesday September 6th!

When the surveys go out, we ask that you complete it as soon as possible so we can make our orders with our production partners. We’re looking to get 80% of the surveys filled before mass production starts.

We’ve included a guide to help you complete your surveys below a quick update on some digital releases.

At this time, MP3 and STL files have been distributed to backers expecting them! Backers should have received an email through BackerKit with the download links.

1) Select your country for shipping and click "Get Started". If you would like to upgrade to a higher pledge tier, locate the link under the "Get Started" button and click that instead. Please note that if you switch pledge levels, add-ons selected on Kickstarter will not be automatically applied to BackerKit.

2) Please read the question prompts and proceed into the BackerKit "store" (Add-Ons section).

3) Once in the store, you’ll see a list of the items included in your Kickstarter pledge on the right side of the page. On the left, you’ll see the options for add-ons!

4) Once you've selected all the items you want, click "Next".

6) Confirm the provided information is correct, provide a payment method, and click "Confirm"

Please note: Due to limitations using PayPal, it is not currently enabled as a payment option for this project. We are looking at making it available closer to when we’re charging cards for outstanding balances due to add-ons and shipping costs. Backers who intend to use PayPal as their payment method should be able to complete their surveys then.

7) You will see this below once you have completed the survey!

Surveys and addresses will be locked closer to fulfillment so you’ll be able to make changes even after submitting your survey until we let you know otherwise! Payment for outstanding balances and shipping will be collected at a later date.

Can I upgrade my pledge through the survey?

Yes! When you get your survey hit the button below "Get Started". This will enable you to up your pledge tier in case you've decided you want a different deal!

My payment didn’t go through and I was dropped from the Kickstarter. What do I do?

Don’t panic! You should still receive the BackerKit survey and you’ll be able to pay for your pledge there.

I missed the campaign. When will preorders be open?

Preorders are now live! If you had a friend who missed out share this link with them!: https://humblewood-tales.backerkit.com/hosted_preorders

Orders placed here are considered BackerKit preorders, not Kickstarter pledges, and will ship after we fulfill backer rewards.

Project We Love: The Sundering

The Sundering presents possibly the highest profile Black-owned offering in the unofficial 5E DnD space.  Starting at ~128 pages and expandable to 200+ with stretch goals, The Sundering offers something really special for every player and GM, with a diverse pantheon of gods, including Oya from the Orisha and Set from the Kemetic pantheon. The Nation itself is ruled by a trio of women of color, and the highest lawman of the campaign's main town and his dockmaster husband enjoy a world where everyone has a place at the table. Character origins will be up to date with the newest changes, as well!

There's less than a week left in the campaign, check it out!

We’re so incredibly grateful to our backers, contributors, and colleagues who made the campaign such a success! Thank you all so much for your support and enthusiasm for Humblewood Tales.

Kickstarter is going to begin to process payments for this campaign and the process can take anywhere from 2-3 weeks. When we get confirmation from them that this step is complete, we’ll send out BackerKit surveys!

Surveys will then be sent out to collect your shipping details along with your pledge and add-ons. You'll be able to upgrade your pledge or add additional add-ons with the survey as well! As we get closer to releasing surveys, we will have information on how to fill out your survey, as well as specifics for choosing your add-ons. We ask that you hold your BackerKit questions until then! Surveys will be open until we start fulfilling, but to guarantee your order we suggest filling out the survey as soon as possible.

We will be sending you the digital files through BackerKit as rewards are completed. Minis STLs and MP3s will be ready by the end of August!

Did you or a friend miss out on backing the campaign? It’s not too late!

We will be accepting late pledges for the books, box set and add-ons! Everything that's been unlocked (excluding Kickstarter exclusives) will be available for preorder.

Thanks again to everyone who’s supported us throughout the campaign.

We can’t wait to bring Humblewood Tales to your gaming spaces!

We know we said we wouldn’t post again until the campaign ended, but we passed the 400k stretch goal and want to add just one more!

What did you unlock? Humblewood Tales #8!

An eighth adventure is in your future!

If we reach 450k, we’ll go on one more adventure! Think we can make it? Help us get there!

Connect with more citizens of Alderheart in the r/humblewood subreddit!

It's the last day of the Humblewood Tales Kickstarter!

We want to say before it ended that we appreciate all your support with the project and can't wait to get started on all the new tales for you. This is the final update we'll post until the campaign ends, so until then, pull up a chair and watch some numbers climb up with us on our Discord!

What did you unlock? Humblewood Tales #7!

Another adventure has been unlocked!! 🤯

We’ll create a seventh adventure to let you explore even more in the world of Humblewood!

If we reach this level, we’ll create an eighth adventure to let you explore even more in the world of Humblewood and beyond! We're right at the finish line, think we can unlock one last goal before the campaign ends?

Temple of the Amaranthine by Christina Kraus! This design won with a majority of votes (57.6% of them to be exact!)--thank you to everyone who voted!

The Rhythm of Humblewood - Track #10: Rekindle

The final song in the Rhythm of Humblewood soundtrack, great for those large encounters on a fiery landscape.

Tales From Sina Una is a 200+ page adventure anthology set in the lush setting of the critically acclaimed Islands of Sina Una, inspired by the culture and mythology of pre-colonial Philippines.

This beautiful new book features 10 brand-new adventures written by Filipino writers and designers from around the world.
Whether it's diving deep in the earth to fight a great behemoth, finding what’s taken a river, or preventing a war, adventurers in the islands will see firsthand how the world turns and struggles against itself.

Connect with more citizens of Alderheart in the r/humblewood subreddit!